The process of developing these field manuals has been detailed in Przeslawski et al (2019a).

The main challenge in the development of these manuals was to find a balance between being overly prescriptive (such that people prefer to follow their own protocol and ignore the manuals) and overly flexible (such that data are not consistent and therefore not comparable). A collaborative approach was therefore paramount to their development.

Ultimately, over 136 individuals from at least 53 organisations contributed to versions 1 and 2 of the field manual package (see Collaborators section in this introductory chapter). The increase in collaborators from Version 1 to Version 2 is due primarily to i) the new ROV manual, ii) expansion of the BRUV authors based on preparation of an associated manuscript to a journal, and iii) the merger of the V1 NESP field manual with AusSeabed’s Australian Multibeam Guidelines. By engaging researchers, managers, and technicians from multiple agencies with a variety of experience, sea time, and subject matter expertise, we strove to ensure the field manuals represented the broader marine science community of Australia including real-world context, diversity of experiences, and candid acknowledgement of limitations and challenges. This not only improved the content but also increased the potential for adoption of the SOPs across multiple agencies and monitoring programs. After the release of the first version, input from additional stakeholders was actively sought and incorporated into the second version (see the section ‘Version 2 - Updates and Revisions’ later in this chapter).

The process used to develop each field manual included in this package is shown in Figure 3, and the steps are listed below: 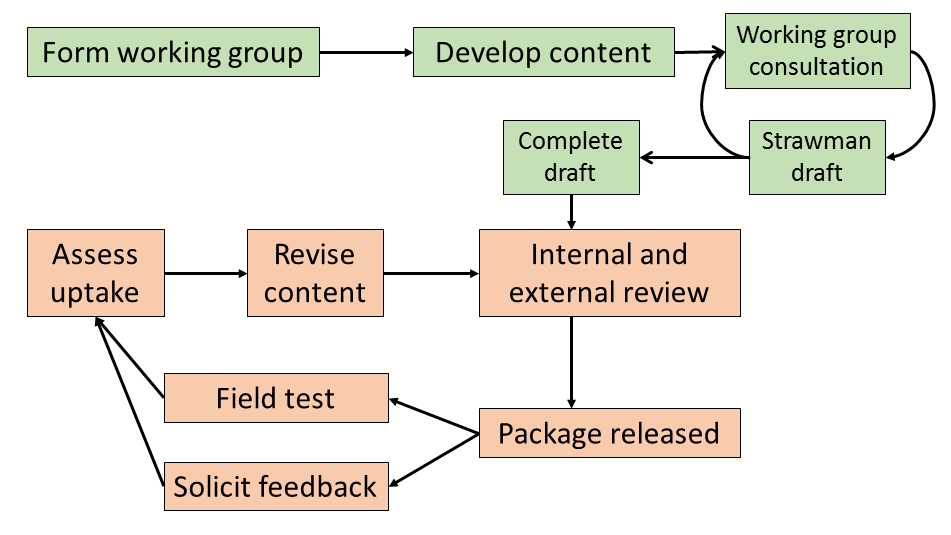 Figure 3: Flow chart showing the iterative process used in the initial development of this field manual package (version 1, orange and green), as well as version 2 and subsequent future versions (orange only).

Figure 4: Collaborative network that developed the marine sampling field manuals. Working group members are listed in a table at the end of this chapter as authors or collaborators.